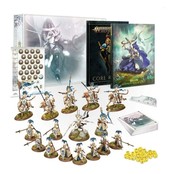 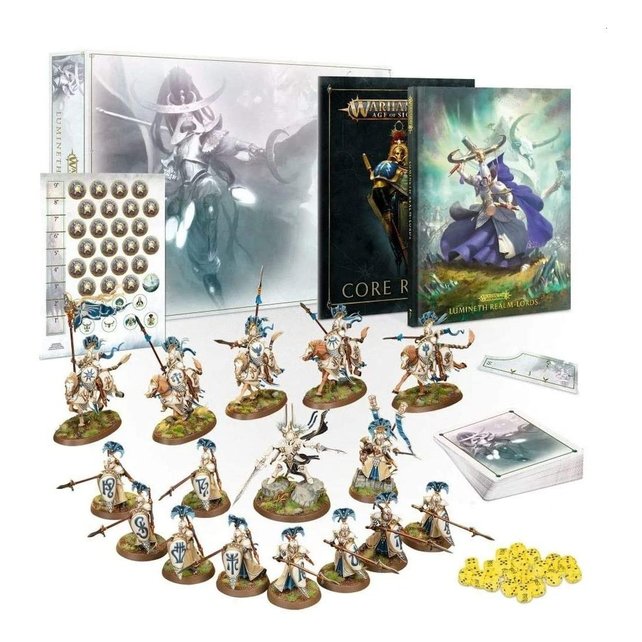 The battlefield glows bright as the Lumineth go to war. These elegant aelves hail from Hysh, the Realm of Light, where enlightening magic surges in the air itself. Able to channel arcane power through the marvel of aetherquartz, they are faster, more dext

The battlefield glows bright as the Lumineth go to war. These elegant aelves hail from Hysh, the Realm of Light, where enlightening magic surges in the air itself. Able to channel arcane power through the marvel of aetherquartz, they are faster, more dextrous and more magically talented than any of their myriad enemies. Yet in the shadow of that excellence lies pride, and it has led them down dark paths indeed.

Discover the world, lore and rules for your army with the full and unabridged Battletome: Lumineth Realm-lords. This edition will be found only in this set, featuring a soft-touch cover, ribbon marker and gilt page edges. Take to the battlefield with 16 brand-new Citadel miniatures, available first in this set. This box includes the Light of Eltharion – a heroic commander for your forces featuring a Warhammer first – hollow, animated armor, ten Vanari Auralan Wardens – a fully customisable set of aelven infantry armed with massive pikes that make for the perfect objective holders and defensive troops in your force, and five Vanari Dawnriders – a fully customisable set of aelven horsemen capable of carving through enemy infantry with contemptuous ease.

This set also contains a suite of exclusive accessories for your army, including an acrylic combat gauge, perfect for small measurements and featuring artwork of Teclis, 20 yellow gem-effect dice featuring the Runic Mandala of the Lumineth on the 6s, a token board with a 9-inch range ruler, 23 aetherquartz tokens and 9 generic tokens that are ideal for tracking command points or objectives, and a pack of 36 reference cards that include quick reference spell lores, artefacts of power and command traits, ideal for keeping track of your heroes’ abilities. 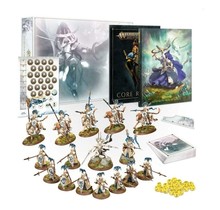